A Vision of UWBA’s Future

A candid talk with eight-year board member and start-up builder extraordinaire, Noah Lichtenstein, about UWBA’s successes and struggles–and his plans to make it even better.

Do you have any ideas of how United Way Bay Area (UWBA) can position itself to better alleviate poverty?

On the one hand, I think one of the challenges we have had and one of the things we have learned is that it is hard to put a target on poverty because there is no one face of this multifaceted problem. It is very complex because it is comprised of everything from access to healthcare to financial stability to literacy to education. I have always struggled with understanding that poverty is an enormous concept with so many things that can contribute to the problem.

It is very hard at the same time to make an argument of finding the fundamental things that poverty is comprised of. So I think that what United Way has done recently and is very excited about is really honing in on specific factors that contribute to poverty. Jobs and employment are a fundamental challenge for people and are key for people to be self-sustaining. So if we focus on components of poverty such as programs that help people get trained and prepared and help people find jobs, then that leads to stability and income which addresses part of the problem. I think breaking down poverty into micro units, we can actually measure those specific outcomes and results in terms of how many jobs created, and how many people reach a self-sustaining income.

I think there is a gap between the great work we are doing and the ability for the public to understand the great work we are doing. It is on us to better market and better position the work that we are doing into the way that people are used to measuring success. For new people to be brought into the fold, they need to understand what the face of poverty is in the Bay Area. Too many of us don’t see it because we live in a bubble. We need to help people understand that the problem is there and make it clearer what actions can be taken to alleviate poverty.

During your service on the board, what is the biggest achievement you have seen UWBA achieve?

United Way recognized that people in poverty don’t just need help from one specific program, but services need to combine and bundle. From our experience in the community, we took the feedback from the community and partners and realized that we could achieve greater outcomes through bundling services. We took those learnings and put them together in creating SparkPoint. I looked at SparkPoint as an example of an organization that is leveraging its experience and its depth and breadth of relationships to really understand how we can make meaningful change in our communities and we took the initiative to design, build, and promote the SparkPoint center which is now a shining example for United Ways across the world.

A second one is that United Way was struggling for an identity coming out of some past challenges that they had. Through the dedication of so many great leaders, board members, and staff of United Way, we have really built a strong foundation and reestablished United Way as the preeminent philanthropic organization of the Bay Area. People always ask “Why United Way?” I say that creating real change is not simple. Poverty is complex and amorphous–it is made up of so many different challenges. It is hard and complicated work. United Way has the policy arm, the advocacy arm, and is able to go to Sacramento, get laws passed to get more money in the pockets of low-income individuals, and we can show that the federal poverty line is not the same in Alabama as it is in the Bay Area. And now we look at Earn It! Keep It! Save It! (EKS) and can look at it and say that we are returning 60 million dollars into the pocketbooks of low-income families in the Bay Area. So I like to point to EKS as an example of a multifaceted approach that advocates for our communities in Sacramento.

What is the New York Times headline for UWBA two years from now?

I hope in two years we’re able to say “United Way lifts tens of thousands of families out of poverty.” Beyond that, I want to see United Way Bay Area be that beacon and shining star, so when someone raises their hand and wants to help, United Way is the first call that they make. I think in order to do that we need to better message who we are, better message what we are doing, and better form a relationship with the end user and in our case the donors, advocates, or volunteers. We need to be able to know who they are and be able to communicate with them the way the best e-commerce company or the best social media company does. So maybe another headline would be “UWBA takes philanthropy into the 21st century” or something along those lines.

Learn more about Noah at his LinkedIn profile. 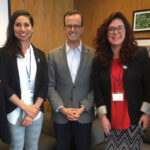 Advocating For An Equal Chance For All 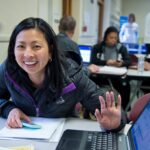 Laying the Groundwork for Tax Season 2017