Celebrating Women with Stories of Inspiration

Women’s History Month promotes women’s equality and solutions for more gender balance in all aspects of society. By taking actions, asking questions, having conversations, challenging habits, rewriting laws, and inspiring others, we strive for a world that supports women and treats them equitably. In honor of this year’s Choose to Challenge theme, United Way Bay Area’s Women United is celebrating women that have inspired us to challenge our own beliefs and actions. We’ve asked Bay Area residents to submit stories of a woman that has made an impact on their lives either personally or professionally. We hope these stories will spark more inspiration to reach for gender equality.

How has a female mentor opened doors for you professionally or personally?

“A former boss told me to ask for forgiveness not permission, to compensate for my unease at suggesting ideas. I’ve heard men use that phrase to each other to bring each other up the ranks. I embraced my creativity and rose up the ranks with the backing of my female boss.”

“My mentor helped me get through a number of challenging situations I was facing as a manager. She shared her experiences with me and helped me by role playing what I could say.”

“[My mentor] brought me with her to her new job and got me to expand my horizons and comfort zone.”

“[My mentors] have shown me through their experience, strength, and hope that I can be my authentic self and not be afraid to exist while struggling to do that.”

“One of my early bosses told me to stay true to myself and keep having integrity to do a good job – that it would be noticed and rewarded eventually. That word integrity stuck with me. At the time, I felt that there was nowhere else to go and was restless and probably a little crabby. Soon a job opened, and I was rewarded for my performance…and well, I still love this job!”

What is a lesson you’ve learned from an inspirational woman in your life?

“Being a stay-at-home mom is one of the hardest jobs in the world.”

“Giving something a try is never a waste of time.”

“Always keep a spare pair of shoes in or under your desk and chopped salad is a good choice for a meeting – doesn’t distract or get stuck in your teeth!”

“LET GO OF THE FEAR AND LOVE YOURSELF IN THE PROCESS.”

“That I had choices. By going to college, that was a huge door opening to anything I wanted to do. I never felt that marriage or children were the only path, like my mother’s generation. She was passed over for a promotion once they knew she was getting married. She hid her pregnancy from her employer so she could work longer.”

Why should more people mentor women and girls?

“It helps to create a path – especially in fields that have fewer women.”

“Because we have been subjugated through history and modern society to be a certain way that constrains our full identity while upholding [a] patriarchy and other abusive powers at play.”

“To give them positive examples, show what a leader looks like, and let them imagine what a variety of work there is for women to choose from.”

What is one way anyone can challenge gender bias and inequity in their community?

“Make sure there is at least one woman at the table while making decisions. Especially if the decisions directly impact women.”

“Instead of saying “fireman” “cameraman” “fisherman” or any other [insert profession with -man ending] use gender-neutral words so girls do not grow up thinking that these are professions for men! Use words like fire fighter, photographer, etc. A video called “muffin man” is one of the most popular youtube videos (it has 460 million views) for kids and the song “muffin man” “ice cream man” “fruit stand man”… we can do so much better than this!!”

“When I am sometimes unsure of my behavior, I’ll ask myself: If a man were doing this, would this be seen as an ‘issue’?“

“Change the narrative and remind each other that a woman who speaks up isn’t threatening (or other negative words that strong women will be called). She’s a leader!” 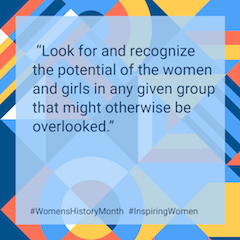 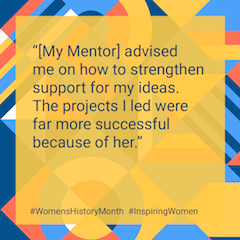 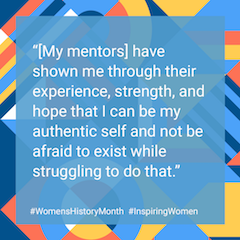 INSPIRE MORE CHANGE BY DOING ONE OF THE FOLLOWING:

Tell us about a woman in your life that has inspired you. 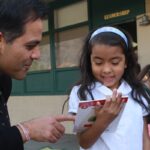 “To those who are given much, much is expected” 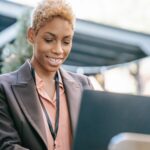 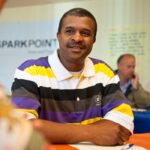